Last night I had a friend over and we were messing with Oscar a bit…but it was OH so fun, we couldn’t help ourselves!  While we made my lil’ pretzel treat bags for some special people, Oscar wanted to get in on the festivities too! 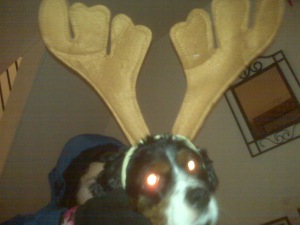 heehee Osc was NOT happy 😉 But we were!

I think he is okay with it now, though as I gave him some lovin! 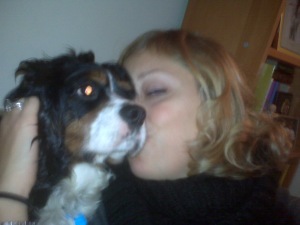 Oh, and here is the look I’ve been rocking lately since the Philadelphia turned into the MidWest was hit with some CRAZY snow…The awesome new socks my Husband got me and polka dot waterproof boots 😉  cuuuuuuute! 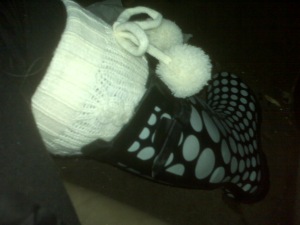 So, totally off the topic, and maybe a damper on this cheery holiday post, but I have been a bit rocked by the death of Brittany Murphy.  I think the most intriguing and relative factor to me is the speculation behind whether or not she had an Eating Discorder. I am not going to debate this on the blog, although I will show you before and after pictures…

Moving on, I guess what upsets me is her Husband’s quote regarding the Issue.  Denying the rumors of her ED, “Look at that smile,” he went on. “That’s not the smile of an anorexic or drug addict or someone in a bad marriage. That’s someone who was content with her life.” (according to Us Magazine)  UM SERIOUSLY?  What does the smile of an anorexic look like?  That is a TERRIBLE thing to say regardless of whether or not Brit was plagued by this awful disease or not.  Ironically, here is a picture of a SMILING Karen Carpenter who died at AGE 32, like Brit, from an Eating Disorder. 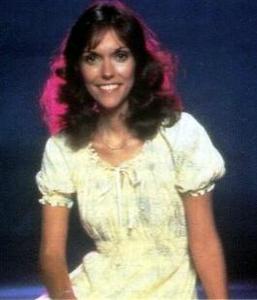