Finally!  The post you all I have been waiting for!  Luckily, I heard three of my faves in a row in the car on the way to work which pumped me up for my run later…Do you Remember (Jay Sean), Hard (Rihanna), and ironically, Transform Ya (Chris Brown).  So, here are a few of my FAVE playlists!  By the way, I will be doing a new one each month that will feature new songs added to the “runner’s dream playlist” (not necessarily new on the radio, but new to “the mix”).

Jay Sean- Do you Remember

Disturbed- Down with the Sickness, Violence Fettish

The Casting Out- For Tonight

Krishna Das (typically yoga music, but this song gets me going!  I have NO idea what he is saying but Oscar and I BOTH like ths song!- Township Krishna

Kris Allen- Live Like We’re Dyin’ (you KNOW I love this song!)

Darude- Sandstorm (lol- this does actually get me going!)

MIND GAMES I PLAY- So what I have been doing lately is playing a bit of “mind games” with myself.  I am the kind of person who gets OBSESSED with a particular song and I like to rock out to it at LEAST 3-4 times in a row (hey, it helps with the lyric-learning so I can belt along!). SO, I have been picking a “song-per-mile” and rocking out to that song on repeat until the next mile (and song) comes!  It seriously works to take your mind off of things and helps you achieve mileage goals…I think.  Try it- let me know what you think!  At least you can memorize lyrics so that you can belt it out with the best of them!

We have some serious Bruce love in our family, but the top prize of all time fan definitely goes to this one here…

I had a great question from a very sweet reader,

“what is that roller ball??”

Refering to the Garnier Fructis eye roller ball that I discussed in my recent Target post, this a great product.  It is an affordable and easy way to work on those “trouble areas” around the eyes. It is said to reduce puffiness as well as crows’s feet/age lines.  Hey guys, the big 3-0 is rapidly approaching…gotta be proactive!  Here is the “official” description of the product.  You can get these babies at any common drug store.  Now, I don’t have “before and after” pictures from my first brief stint with this great product, but I will be posting before and after pictures this time.  Basically, someone I knew and trusted stole my eye roller.  How redonk, right, well…it’s baaaack! 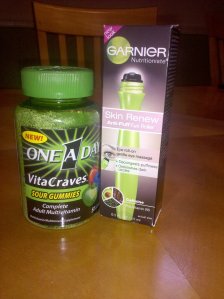 Eye roller on the right keeping company with my yummy Vitacraves!

SPEAKING of eyes, I MUST share a beauty tip with ya’ll or I just would not be doing it justice if I did not!  Ok, so I am not the biggest mascara fan. I mean I love the way it looks, but I am not the best at putting on or keeping it on!  It definitely does not contain itself to my lashes 😉  So, for many years now, I have been getting my lashes DYED with henna. It is all natural, very inexpensive, easy and fun!   I suggest getting it done at any salon around you that provides this service. It usually costs between 20 and 30 dollars but lasts about 2 months.  You can choose what color (I get black, but they have tinted blue, etc.). They put it on like mascara while you are laying down, and they leave it on for about 10 mins.  Then they take it off and here is what you get! 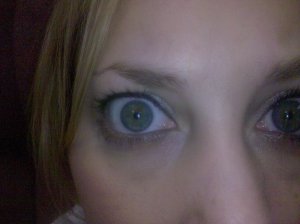 Freaky picture, but you get the point! PS: my nose is SOOO not that crooked lol.

I get mine done at AME salon and Spa in Wayne, PA. I LOVE it there.  I will do a full review one day soon.  In the Philadelphia area, you can get it done at Toppers Spa as well. If you are searching for more places, just ask them if they do “henna dye for the eyelashes.”  Anyway, definitely try it out!  It is PERFECT for the summer/pool- you can go completely without eye makeup and still look half awake!  Or, to “drama” it up, you can coat with mascara and the look is UNREAL!  Check it out. OK, toodles for now!