So I have been avoiding writing this post for a couple days now because I know there are going to be some serious disagreements.  But, I found Seasons 52 to be entirely…underwhelming.  Husband finally agreed to take me here, as I was so excited,  so away we went over the Ben Franklin Bridge and into New Jersey!  The beginning of the meal was promising.  I even had a glass of wine that was bearable- this is difficult for me, as I usually find fault in most bevs. of this sort, but the waitress definitely suggested a good one to me off the wine list.  It was so good that I took a picture so I could remember…it was the 2nd Riesling down.  I had about two three sips.

My appetizer was really good- I got the edamame with green tea flavored sea salt they make in-house.  Husband’s buffalo chilli though was just “so-so” and we should have seen it as fortelling to the rest of the meal.  He said it was more like soup than chilli…

OK, so I know I am impatient in general, but seriously the service was SLOW!  Maybe two hours a half hour later our food came.  UGH.  I got the shrimp stuffed with crab meat.  Um, where’s the crab meat people? It was like stuffing and the shrimp were VERY overcooked.  For someone who cooks the crap out of most things herself, these shrimp were brutally cooked and tasted like poop!  I only had 2.  Bummer.  Husband said his was “fine” but I couldn’t look at it because it was ahi tuna still alive very rare.

OK, so then came the HIGHLIGHT of the evening…dessert!  200 calorie carrot cake was amazing!  It was CLEARLY regular full-fat and caloric dessert material but in a small (very small shot glass) portion.  THIS is how I think everyone should eat.  Eat what you want but a SMALL bite!  Heaven! 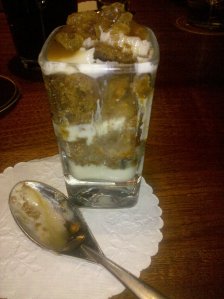 All in all, I probably will wait a while if ever to try Seasons 52 again.  Maybe I was just real hyped up???? Dunno.  Have you been there before?  Comment!  Did I maybe order the wrong thing?  Do tell!  Toodles!

Black Eyed Peas are tearing it up as well…Killing it!  Seriously, I am impressed by this year’s Grammys so far!  wootwoot!

Wow.  PiNK is rocking the Grammy’s too!  Holy swinging and singing at the same time!  Wait…In the water?!?  Unreal!

She is UNREAL.  Ah-mazing.  Watching the Grammys.  More latah!