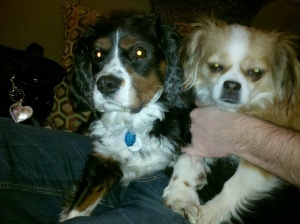 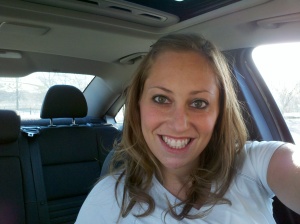 Like the one above.  It looks like another lovely day on the road running.  The above picture was actually taken at Cooper River Park, and was the run that “broke the camel’s back” (or the runnner’s leg hehe)  literally.

So, here’s the root of the “bad decision:”  I LOVED running Disney.  Loved running it so much that I didn’t want to stop.  And to be honest, I am a runner who suffers from this insane and irrational fear that I will “fall out of running fitness” within a day of the race for which I had been training for MONTHS.  irrational, I know, but feel free to leave a comment to knock some sense into me.  So anyway…as you  know I have had some issues in the past with my left shin. It was a splint that turned stress fracture, that “healed” but is still sensitive and gives me problems when I overuse or abuse it.  Well, blog world, that is JUST what I did. Overuse and Abuse.  Poor shinny-shin-shin!  OK, so here’s the deal:  Mrs. Genius UpsandDownes decides she will go for a “little” three mile jaunt on the Tuesday after the half marathon (only one day in between; the race was Sunday) to “get my lactic acid flowing.”  OK, fine.  BUT I did it on the crazy 12 laps-to-a-mile track at the gym, thereby irritating above mentioned shin from the constant turning impact around the sharp corners of the track.  Bummer.  So what do I do?  I keep pushing it, of course.  I was busy Wednesday, but here comes Thursday, and I hit up the treadmill for another three-miler.  Really Jess? Really? Really.  OK, so shin is just annoying at this point.  What do I do?!? You guessed it. I discovered the Cooper River Trail and banged out another 3.7 on Saturday.  Oh, and let’s just add the straw that broke the camel’s back, because when I ran it AGAIN (the Cooper River Trail) on Tuesday, I BUSTED it out as fast as I could (to escape the pain- makes sense, right? NOT!)  3.7 miles in 31 minutes, successfully “benching myself” from running for at least a week. SO, there ya have it folks.  Should have just taken off the week after the half marathon, let my body restore and call it a day.  BUT no, sometimes we make not so good decisions; even downright awful ones like this one. BUT, we must learn.  So, learn, I have friends.  Get used to some pics of this: 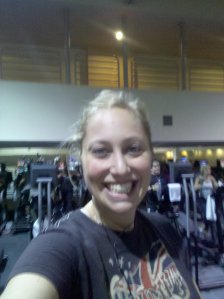 Me at the gym 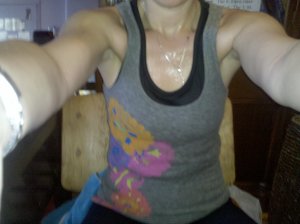 Me post-yoga (Bikram in this case, obviously) 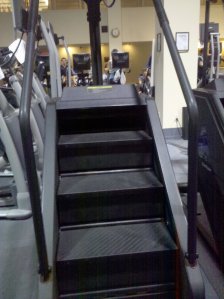 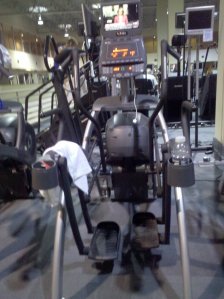 …or maybe just this 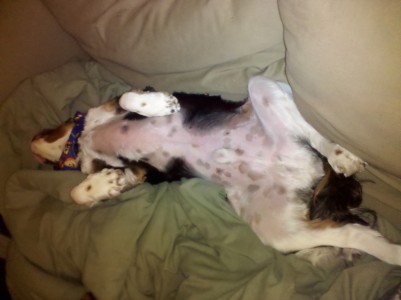 UGH!  So frustrated with myself for pushing too hard and not honoring my body. Do you or have you ever done this?