I am typing this while glued to the TV in anticipation of the capture of the second perpetrator in the horrible terrorist attack at the Boston Marathon.  I, myself, have been greatly affected emotionally by this incident, as it hits close to home and makes my heart hurt for all involved.  In fact, there was a Jessica Downes who was severely injured in the attacks and I have had some reach out, inquiring if it was me, in a strange coincidence, her name being Jessica K (maiden name same initial as mine) Downes, a fellow runner.  Both she and her new husband, married in August, lost a leg in the brutal attack.  Here is an article about this lovely young woman. Just heartbreaking. It is so hard to want to help and not know how.  I ordered an Adidas Boston Stands as one shirt, all proceeds going to the One fund.

And Yesterday, in a show of support and solidarity, Philadelphia Runner organized a community run for Boston.  From their site:

Join local running groups, running stores, and running friends as we run across Philadelphia on Thursday night to show our support for our friends in Boston. Runs will meet at various locations throughout the city at 7PM. They will then run to City Hall where we will meet in the courtyard at 7:30 and then run together, as a group, down Market Street to Independence Mall (Market between 5th and 6th). From there people will disperse and continue their runs individually or with their group.

All runners and walkers are invited.

I donned a Boston-esque shirt

and headed out to run down to City Hall.

The scene was powerful, emotional and fitting. 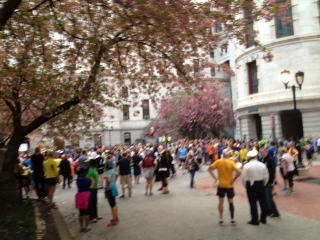 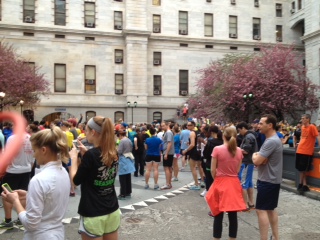 We then all ran down Market Street to Independence Mall where some more words and chants were heard.  It was a beautiful way to show support for those affected.  WE RUN BECAUSE WE CAN.  Much love.

One thought on “Community Run For Boston; For Jessica Downes”