“Zach, are you being naughty?”

We have a new word, friends.  Bobby.  Now, I know toddlers are hard to discipline, but imagine an (adorable) little face looking up at you while about to drop your glasses in the toilet and you say to him “NO!  Bad Boy!”  And he replies, “BOBBY!?!?”  I mean, seriously, how am I am supposed to not laugh?! And we all know laughing while disciplining ALWAYS works. NOT.  Incidentally, his favorite book, Brown Bear Brown Bear is also called “Bobby Bobby” to him.

So, I am trying to find a better “disciplinary technique.”  One of Zach’s “bad boy” (“Bobby”) behaviors, is throwing food off of his high chair; sometimes in an attempt to feed the puppies and sometimes just because.  I have tried to put him in a “time out” by turning his high chair toward the wall.  This basically just resulted in an increase in the square footage of “battle ground” as he just threw the food at the wall, a few feet away from where his chair normally is.  And when I took the food away? His “fake laugh” which is also….you guessed it: hilarious.

Sometimes I count to three when he is being “naughty” (Which he has also labeled “Bobby”).  Another one I’ve tried was ripped off from my friend.  She was over one day with her toddler and I heard her say “STOP.  LOOK.”And then she gave “the command”  EX:  We don’t throw glasses in the toilet.  I tried that for a day until Z brought me another one of this books and turned to this page for me to read: 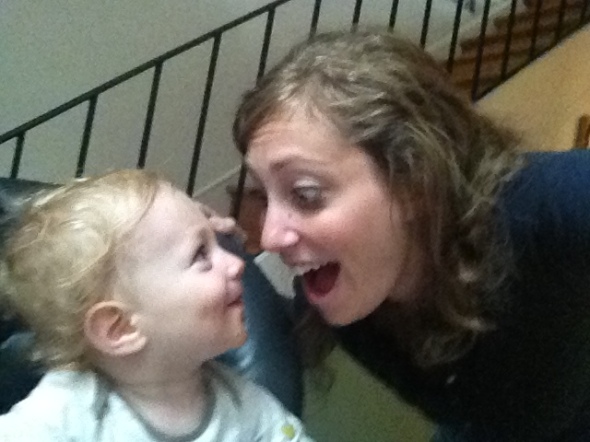 So tell me: What are your discipline techniques?!